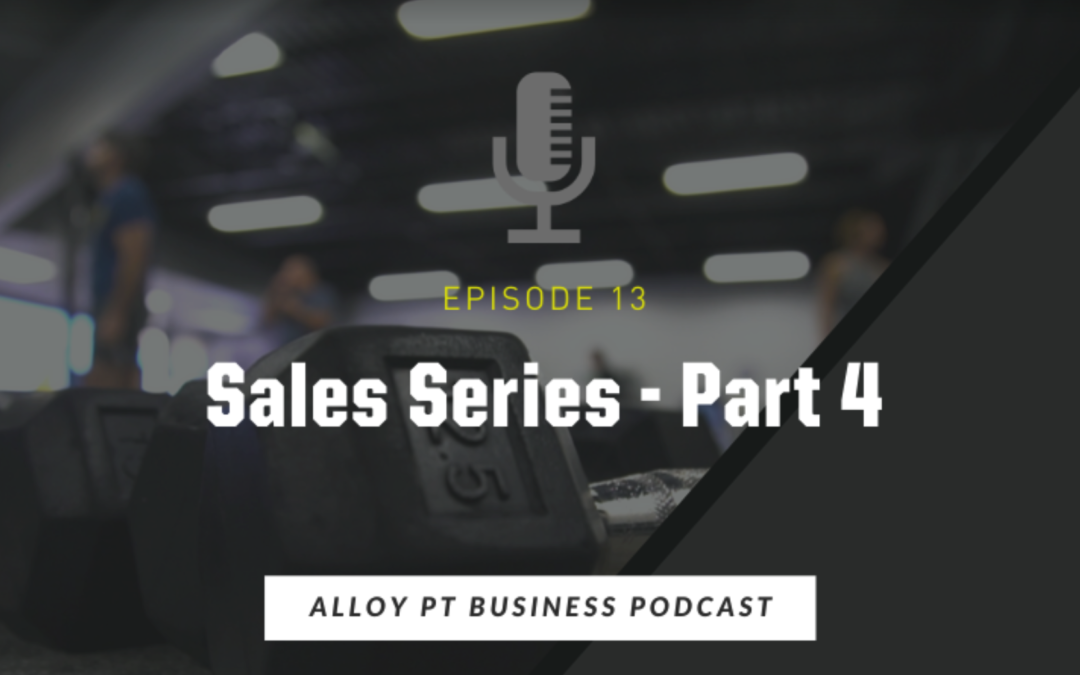 In the fourth part of our personal training program sales series, we explain how to close the sale. It’s about when the time comes to sit with the client and talk about money. Stay tuned as we walk you through the process.

Mentioned in this episode

Part four of our four-part one hour, what we call the starting point session. Today is all about asking for the sale. You’ve got to prepare them to get to this point in the session and you’re going to sit down with them and ask them for money before we now we dive into it.

We have real basic membership options. Anything more than four options is too many. Too many choices will cause people not to buy. It’s too confusing. We have good, better, best memberships, and we know what our most successful clients do. So the key is to simply look to the person that you’re selling and say, “Based on what we talked about and your goals, what I saw from the functional movement screen and your workout, this is what I’m going to suggest.”

Then you simply circle the option that you think is best for them and let them know what your most successful clients do. You are basically letting them know how other people in their similar situation are succeeding at your location.

Don’t Sell From Your Wallet

Keep in mind that if you are selling or if you own a facility and you’re having somebody move into sales, it’s really key that whoever is doing the selling understands the value of what you’re selling from a financial standpoint. A lot of people that are in that position are not going to be in the same financial position as the person that they’re selling to, and we have to be really careful not to sell from our own wallet, for lack of better terms, which means if your income wouldn’t support a $300 a month membership, don’t let that hold you back from selling a $300 a month membership. When I opened here, I was 22 years old and I was selling, you know, a hundred packs at $30 a session to people, so that’s $3,000

When I looked at the industry overall and I looked at the changes I was making for people, I had no problem asking for $3,000 because I knew what the value was. Just because I hadn’t accumulated enough wealth to be in the position of the person sitting across from me didn’t mean that they were better than me or that I was intimidated or that I thought about what my budget was when I was selling them. I see that a lot with trainers and or salespeople in this industry is they really use their own limiting beliefs to limit what they ask for.

Slide it over. Give them a minute to process because typically if you start down selling, and the salesperson says “Or you could do the two days a week” and then the client will go, “Oh, Oh, okay.” They literally haven’t even had a chance to process the first prescription yet. So slide it over and just sit there until you hear something back.

If you’ve done everything well up to this point, if you’ve done a really deep dive on why they’re there and they were and you could get them to open up, you’ve done a good movement assessment, we use functional movement screen and the why’s behind it and what’s important and show them we have a process to what we do, gave them a fun engaging workout, gave them some things that were they were emotionally tied to. Which means that you listened in the peeling of the onion. There should be only one objection at this point and that would be money.

I’m a huge proponent of if you can’t get them to say yes at this point, you probably didn’t set it up correctly in stages one, two, three of this one hour. And it’s really hard to overcome objections. So there’s a whole bunch of sales about overcoming objections in this day and age with the way that people buy. People are too savvy for that. Once you take that relationship from personal to transactional, yup. You can’t get it back. So it is about the money, but it’s not about the money.

If you’ve done a great job and you slide this paper over and they make it transactional by saying that’s just way too expensive, then, of course, you say, “What would make sense for you?” Again, we only have good, better, best. It’s just going to be based on budget. I’m not saying don’t sell hard, but what I’m really saying is put more effort into stages one, two, and three. That way when you get to this point, you look someone in the eye and ask for the sale. It’s not icky. It doesn’t have to be transactional. And the only objection should literally be they can’t afford it.